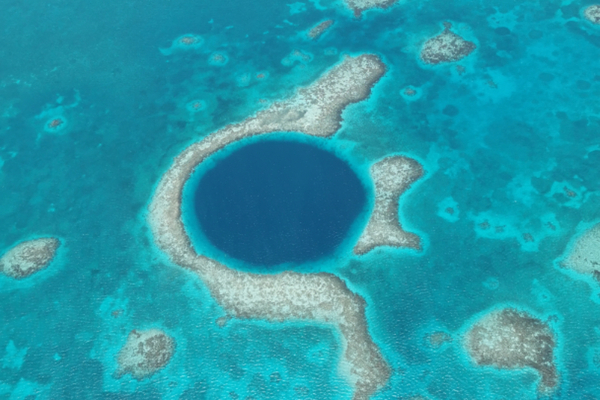 The slight shiver in the air gives me goosebumps as we wade waist deep in an underground river, eyes wide as we admire the magnificent shimmering stalactites and stalagmites. “Do you want to see without the light? asks our guide, causing nervous gasps among our motley group of amateur cavers. “Let’s turn off our headlights,” he says and we dutifully obey until, click, the last light goes out.

I try desperately to see – in vain. It is dark and all I hear is the gentle murmur of the stream. I expect claustrophobia to hit, but instead a strong sense of peace and calm comes over me, like I’ve been meditating all day and not just, in fact, doing hiking and climbing on rocks for almost three hours.

It must be the magical effect of the Actun Tunichil Muknal, better known as the ATM Cave, a vast geological wonder in Belize used by the ancient Mayan people as a sacred burial ground. Today it is a museum and houses Mayan artifacts and the skeletal remains of human sacrifices, including the Crystal Maiden, the most intact of them all.

This mystical excursion may be more adventurous, but those who dare will be rewarded with a unique and ethereal experience – a fitting introduction to small but mighty Belize.

The entrance to ATM Cave, which houses ancient Mayan artifacts

On the natural side, this South American nation packs a punch. On land, 61.1% of unexploited land the tropical forest extends over the country, while its the coastline has about 200 miles of unspoilt barrier reef – the second largest after Australia’s – and is a UNESCO World Heritage Site. So it’s really important to know why conservation is a priority.

“Sustainability is something that is ingrained in our societal DNA,” says Debbie Gilharry-Arana, travel industry specialist at the Belize Tourism Board. “We have always been a destination that protects our natural resources. Over 40% of our land mass is protected as national parks, wildlife sanctuaries and reserves; we were already ahead of the game with this even before Covid.

One of the latest eco-initiatives is the Wit Concrete site in the Turneffe Atoll Marine Reserve, 20 miles east of Belize City. To get a glimpse, we head from our rainforest haven Hidden Valley Inn to our new base on Caye Caulker, a laid-back little island where you’re encouraged to “go slow” and walk around without shoes. Even our hotel is called Barefoot Caye Caulker.

Wit Concrete is a 375ft World War II ship formerly used for transporting sugar, which has been sunk and reincarnated as a home for marine life and a major new attraction for diving enthusiasts.

The Turneffe Atoll Sustainability Association manages the project. Valdemar Executive Director Andrade says: “By choosing to go to Turneffe, customers are not only on vacation, they are contributing towards the conservation of marine biodiversity and the preservation of one of the best places on earth.

The Xunantunich archaeological site features buildings dating back to 400 AD

Unfortunately for us, rough seas ruined our chances of visiting the site. But we could still follow the fins of the Duke and Duchess of Cambridge, who earlier this year went diving in Belize and hailed the country’s commitment to protect 30% of its marine environment by 2030.

The next day we depart with Ragga Sailing Adventures to explore the Hol Chan Marine Reserve. Along the way, we learn that every tourist boat must register to be checked at the marine station. If you were a big ship dropping anchor on the reef you would be slapped with a £400,000 fine.

Like ATM Cave, snorkeling here feels like an otherworldly experience. No wonder Hol Chan is considered one of the best sites for this, as we come face to face with not only three different species of snapper, hogfish and barracuda, but also green sea turtles, nurse sharks the friendliest and acres of beautiful pristine coral gardens. .

The highlight for me, however, was not in the water but in the air. Heading towards Lighthouse Reef Atoll is the enigmatic Great Blue Hole, a huge limestone sinkhole 300 meters wide and 125 meters deep that can be seen from space. Our flyover tower soars high and low in gentle figures of eight, ensuring the best views of the natural phenomenon, which adorns the coral reef like a sapphire brooch. Divers are also drawn here by its surprisingly clear waters, allowing maximum visibility of its myriad cave formations and peek-a-boo marine life.

Back on land, there’s plenty to explore, but a visit to Belize wouldn’t be complete without paying homage to the ancient civilization that preceded it – the Maya.

One of the greatest examples from their reign can be explored at the Xunantunich archaeological site. Originally built in 400 AD on a limestone ridge, over the centuries it has become a sprawling complex comprising six plazas and 25 temples, the tallest of which is El Castillo, or The Castle, which stands at 40 meters. It’s worth climbing the steep steps to get a closer look at the intricate carved friezes on either side, said to depict astrological symbols. At the platform, I take in the unparalleled views and gaze out over Guatemala in the distance. I feel like I’m on top of the world.

As the breeze blows, goose bumps sting my arms and that familiar feeling of absolute serenity washes over me. I think I know what it is now. It must be Mayan magic.