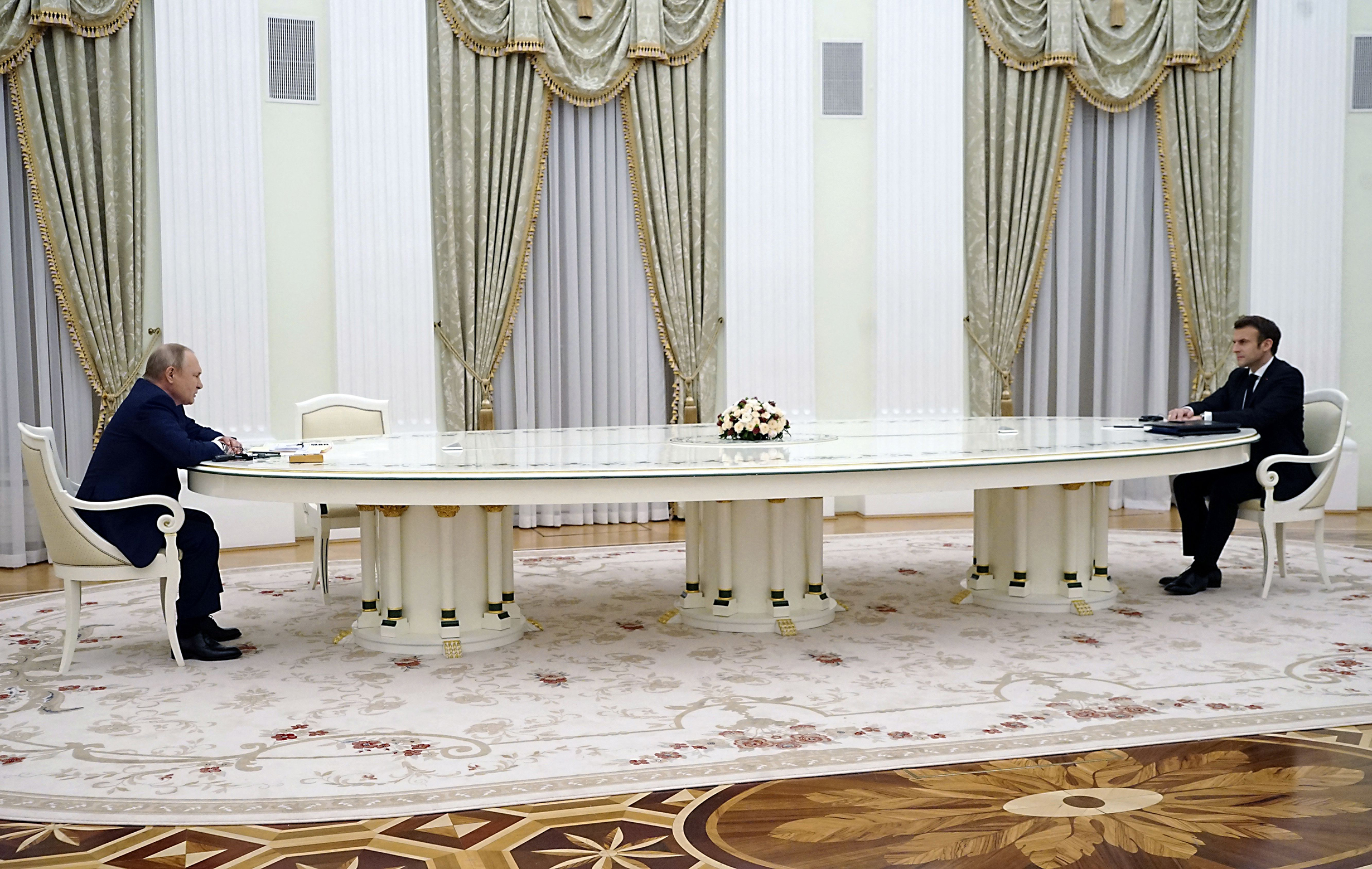 During the lockdown, a friend of a friend met her dates at the public ping pong table in a nearby park. A standard table tennis table is 274 centimeters long, so just a little longer than the social distancing measures required at the time. It was something to do, it was safe and it made sense of the distance imposed on everyone at the time. It was fun and fun, and somehow the distance was less pronounced, which seemed like a very human desire.

Distance, over the past two years, has become a form of storytelling for me. I can’t help but trace it – how uncomfortable people can be when moving through the world, how they cover their hands with their sleeves to press a button on the train or the pedestrian crossing, how they are around others. And then I saw the photo published last week of a meeting between Russian President Vladimir Putin and his French counterpart Emmanuel Macron. Media coverage of the meeting to discuss the escalating crisis on the Ukrainian border appeared exemplified by a photo of the men seated at opposite ends of a four-meter-long table.

The memes quickly chained themselves: the entire cast of Leonardo da Vinci Last Supper (1495-8) seated between two men in costume; a pair of ice skaters (presumably from the Winter Olympics) slide across the top of the glass table; the still image stretched into an animation in which the table moves up and down like a seesaw (a metaphor, one Twitter user pointed out, for the pendulum swinging between war and peace). The mockery was to be expected: the internet is quick to pounce, quick to point out ridicule, quick to mock systems of representation when they clearly fail.

A few days after the Putin-Macron meeting, it was reported that the treatment of the oversized table was a retaliatory measure from Moscow since the French president was unwilling to undertake a COVID-19 test at the airport for fear of give the Russian authorities access to his DNA. If that’s paranoia, then it fits: Putin has been incredibly careful with COVID-19 protocols; Macron’s DNA (I presume, although I admit I haven’t watched enough movies to know if that’s true) could probably be taken from a stray hair. But if it’s a power play, it’s totally flat.

Putin is leaning on the table, his back tilted, his hands resting on it. Macron seems more controlled, his posture erect, elbows at 90 degrees. So far so serious, and yet the effect is Thumbeels crashing into a world where nothing is the right size. The long oval table is white, covered with glass and rests on three pillars, each surrounded by small Corinthian faux columns. There is a bouquet of tea roses in the middle, which looks so small that I have to google to see if the miniature roses exist (they don’t). The colossal table rests on a light, powdery floral carpet; behind are three floor-to-ceiling windows covered with golden curtains. The pink and gold color scheme has a dollhouse feel – maybe not what Putin wanted.

The scale is a cliche of power. Like huge thrones, like giant palaces, like the massive halls of parliaments and national assemblies. That power asserts itself visually is an argument well synthesized by Walter Benjamin in his 1935 essay “The Work of Art in the Age of Mechanical Reproduction”, where he writes of how fascism logically leads to a aestheticization of politics. It was known and used long before Benjamin’s formula – portraits of rulers are among the oldest images known to us – but age-old wisdom about the aesthetics of politics is loosened around the edges by the dismissive distribution of images like that of Putin and Macron.

When reading the news online, photo editing can sometimes be a nod to the reader, almost subversive – there’s no need to illustrate an article about parties at 10 Downing Street with a photo of Boris Johnson taking a morning jog in shorts, but I’m grateful to the photo editor who opted for that one. Sometimes it can reveal something very real. If the imagery of power constructs its own system of meaning, there is also a parallel system of image distribution that dwells on the strange, the unexpected, the result of the over-documented and the over-exposed. Where images were iconic because they were singular (think Alfred Eisenstaedt VJ Day in Times Square in 1945, the man standing in front of tanks in Tiananmen Square, Tommie Smith and John Carlos raising their fists during the black power salute on the 1968 Olympic podium), they are now often memorable because they are so recognizable – because of the way they move online. To pass an image through this parallel system of disdain is to offer a moment of rejection of recognizable, established and above all dangerous systems of power.

I come to photographs like Putin and Macron with a slight sense of anxiety. It’s my fear of the abuse of power and the impending mismanagement of power (a fear also of the brand of masculinity that ordered a four-meter table to begin with). I look at this picture of Putin and Macron, and look again, and all I can think of is, well that looks weird. And circulating the strangeness, pointing it out, dwelling on it, laughing at it on Twitter, is to tear holes in established systems of representation; it’s a way of facing power, a little comfort and a smile.