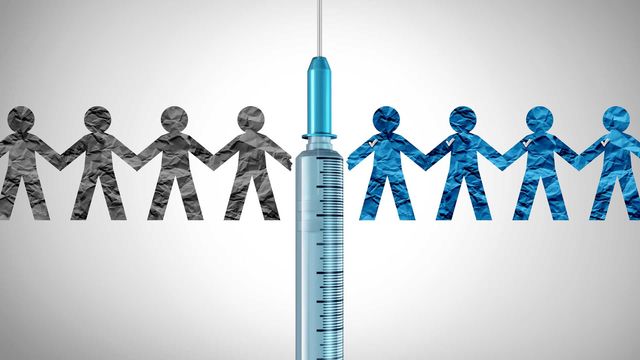 The following article is an opinion piece written by Michael S. Kinch. The views and opinions expressed in this article are those of the author and do not necessarily reflect the official position of Technology Networks.

Anti-vaccine sentiments ran deep in society before the discovery of the first vaccine in the late 18th century. This skepticism has mutated into concerns about variation, a procedure by which the smallpox virus was intentionally inoculated into a small cut in the forearm. Concern about variolation was understandable since even a subcutaneous infection with smallpox would cause considerable misery and sometimes death. Yet this procedure was embraced by many because the risks of variolation paled in comparison to the death and disfigurement resulting from smallpox, which had periodically ravaged humans since time immemorial.

In the early 1800s, a much safer and more effective approach was announced: the use of cowpox (Variola minor) to prevent infection from its much deadlier cousin (Variola major). While the smallpox vaccine saved countless lives and ultimately led to the elimination of a deadly pathogen (which is believed to exist only in freezers in Atlanta and Moscow), the resistance of a subset of anti-vaccines to the smallpox vaccine was just a glimpse of new forms of vaccine skepticism, paranoia and rumors to come.

Cowpox, as its name suggests, is derived from a bovine virus (which is why the protective procedure has become known as vaccination based on empty, the Latin term for cow). Due to its bovine origin, rumors quickly spread among skeptics, who maintained that vaccinated individuals would grow horns and turn into minotaur-like beasts. In what would be recognizable in today’s society, opinions about vaccination were intertwined with Politics.

We could revisit such past notions with a dismissive nod based on current rationalism contrasting the absurdity of such dim visions. Yet every vaccine introduced since then has triggered its own unique variation on the theme of irrationality. In the second half of the 20th century and despite the exposure of misleading motives and data intended to stoke anti-vaccine notions, DPT (diphtheria, pertussis and tetanus) vaccines and later MMR (measles, mumps and rubella) vaccines have each claimed to cause developmental disabilities such as autism. Both statements have proven definitively frauds imposed by greed-driven peddlers…and yet persist to this day. Still later, the HPV vaccine (which prevents several forms of sexually transmitted cancer) was discredited by the belief that it would spark a wave of teenage promiscuity, rumors that again were unfounded. on do.

So far, such irrationality has largely focused on one particular vaccine. While ignorance has been the source of isolated and unnecessary illnesses and deaths, the situation could soon become considerably worse and widespread.

A recently published study suggests evidence for a much more troubling outcome with disastrous potential for amplifying suffering. In a recent edition of The New England Journal of Medicinea team of researchers from the University of California, Los Angeles found that changes in flu vaccine uptake were aligned with political views in general and skepticism about COVID vaccines in particular.

It is generally recognized that individuals in blue trend states were more likely to adopt COVID vaccines while populations in red-leaning states were more skeptical. A remarkable and disturbing result is that these same views were quickly applied to influenza vaccines. By comparing flu vaccination rates before and after the onset of the pandemic and the introduction of the first COVID vaccines in early 2021, investigators measured flu vaccination rates.

While recognition of the COVID-19 pandemic in 2020 itself did not change flu vaccination rates the following fall, the introduction of COVID vaccines in early 2021 had a profound impact on adult vaccination rates. Those in red states have become less likely to be vaccinated against the flu (than before the introduction of COVID vaccines) while younger adult populations in blue states have increased their vaccination rates. Fortunately, these divergent trends in influenza vaccination have not been observed among the elderly (65 years and older), who are most susceptible to influenza morbidity and mortality.

As recently reported in The New York Times, anecdotal evidence suggests that COVID vaccine-skeptical parents are contributing to further erosion of pediatric vaccination adherence. Such irrationality is not particularly new given that MMR vaccination rates had been decline in the years before the pandemic. Indeed, as I said in Between hope and fear, declining vaccination rates have contributed to a resurgence of measles in the United States. This trend is ironic and problematic given the early evidence that recent vaccination with MMR vaccine could confer a protective effect against COVID-19.

These results are not merely troubling in terms of irrationalism taking precedence over objective evidence. If such vaccination trends persist and grow, they could contribute to a growing division not only of political opinion, but also of public health. It follows logically that the future could portend regional scourges and growing pressure on public service needs. Another challenge is that red states are generally characterized as carrying fewer public services and therefore may be particularly ill-prepared for the implications of reported trends in vaccination.

Beyond the sheer human tragedy resulting from unnecessary death and suffering, such tendencies could be both self-destructive and self-correcting. Paradoxically, it is reasonable to assume that massive cuts in vaccination could have profound demographic impacts on the balance of red and blue political views. The nation could experience higher rates of preventable disease and death among those with the strongest political views. Compounding the misfortune is the fact that if young adults held to these misguided views and failed to protect future generations, our society would remain in danger for years to come.

The internal politics of the UDP are heating up: welcome, the Coalition for Unity and Reform! – Love FM