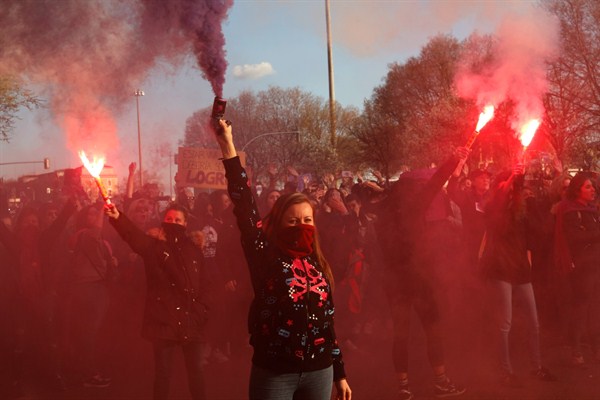 Human rights are under attack. Who will protect them?

Globally, human rights continue to be under attack, whether by populist movements desperate to gain power or by authoritarian governments eager to maintain it. Technology has opened up new frontiers for sharing dissenting ideas across borders, but also for governments to limit the ability of their citizens to express them. And broad assaults are underway against institutions such as the International Criminal Court, which was created not just to provide a remedy for victims of rights abuses, but to set an international benchmark for human rights. Instead, respect for human rights is replaced by dangerous intolerance.

Around the world, authoritarian populists have built their movements by demonizing minorities. In Brazil, for example, President Jair Bolsonaro, who just lost his re-election bid, reveled in his provocations, challenging women’s rights as well as those of LGBTQ and indigenous communities. In Poland, incumbent President Andrzej Duda ran for re-election in 2020 – and won – on an explicitly anti-LGBTQ platform. And even Peru’s new left-wing president, Pedro Castillo, has demonized activists for gender equality and LGBTQ rights, despite championing an ostensibly progressive economic agenda.

Meanwhile, in China, the central government is waging an organized campaign in Xinjiang to strip the predominantly Muslim Uighur population of their cultural identity, including through the use of concentration camps and forced labor. And in Venezuela, President Nicolas Maduro’s government was recently accused by UN Human Rights Council investigators of committing crimes against humanity, targeting political dissidents through arbitrary detentions, torture and extrajudicial executions.

At the same time, the populist rise has reinvigorated civil society efforts to protect historically marginalized communities, including members of the LGBTQ community, religious minorities and Indigenous groups. And with the emergence of a tougher line towards China in the United States, but also in Europe, governments are beginning to impose sanctions on Chinese officials and companies implicated in abuses in Xinjiang.

WPR has covered human rights issues in detail and continues to review key issues on new developments. What are the most effective ways to protect human rights and what additional measures could be taken? What role will technology play in both preserving and limiting human rights? And how will changes in the international order and global balance of power affect the human rights landscape?

Our most recent coverage:

Political dissent and freedom of the press

The resurgence of populist authoritarian regimes around the world has weighed on a range of democracy-related freedoms, including freedom of speech, freedom to express political dissent and freedom of the press. In addition to facing repression and arrests, government critics and the press are increasingly targeted by so-called fake news laws that are often used as a cover for censorship. At the same time, new spyware technologies have made surveillance more effective and more accessible to repressive regimes that are used to silencing their critics.

As indigenous communities come under attack around the world, disputes over resource extraction have become a critical fault line, especially in Latin America. Elsewhere, political and economic marginalization continues to pose difficult challenges.

While women’s rights have made great strides around the world in terms of legal protection, in practice women continue to face challenges ranging from violence and wage discrimination to unfair family law and social customs. Despite some recent victories, gender equality around the world remains far from a reality. And in places where women had made progress in expanding their rights, they suffered recent setbacks – the U.S. Supreme Court’s decision to overturn Roe v. Wade who guaranteed the right to abortion being an excellent example.

The attacks of recent years in the United States, New Zealand and Sri Lanka bear witness to a worrying rise in violent intolerance against religious minorities. But even where violence remains the exception to the rule, protections for religious minorities around the world are often more de jure than de facto. Meanwhile, the rise of the movement protesting against police violence against black people in the United States and Europe has put racism in the spotlight around the world.

Despite the gradual introduction of protections for members of the LGBTQ community in some countries, they remain under threat in much of the world. Meanwhile, the rise of populist movements in Europe and elsewhere has challenged the earlier gains of LGBTQ activists.

Editor’s note: This article was originally published in May 2019 and is regularly updated.