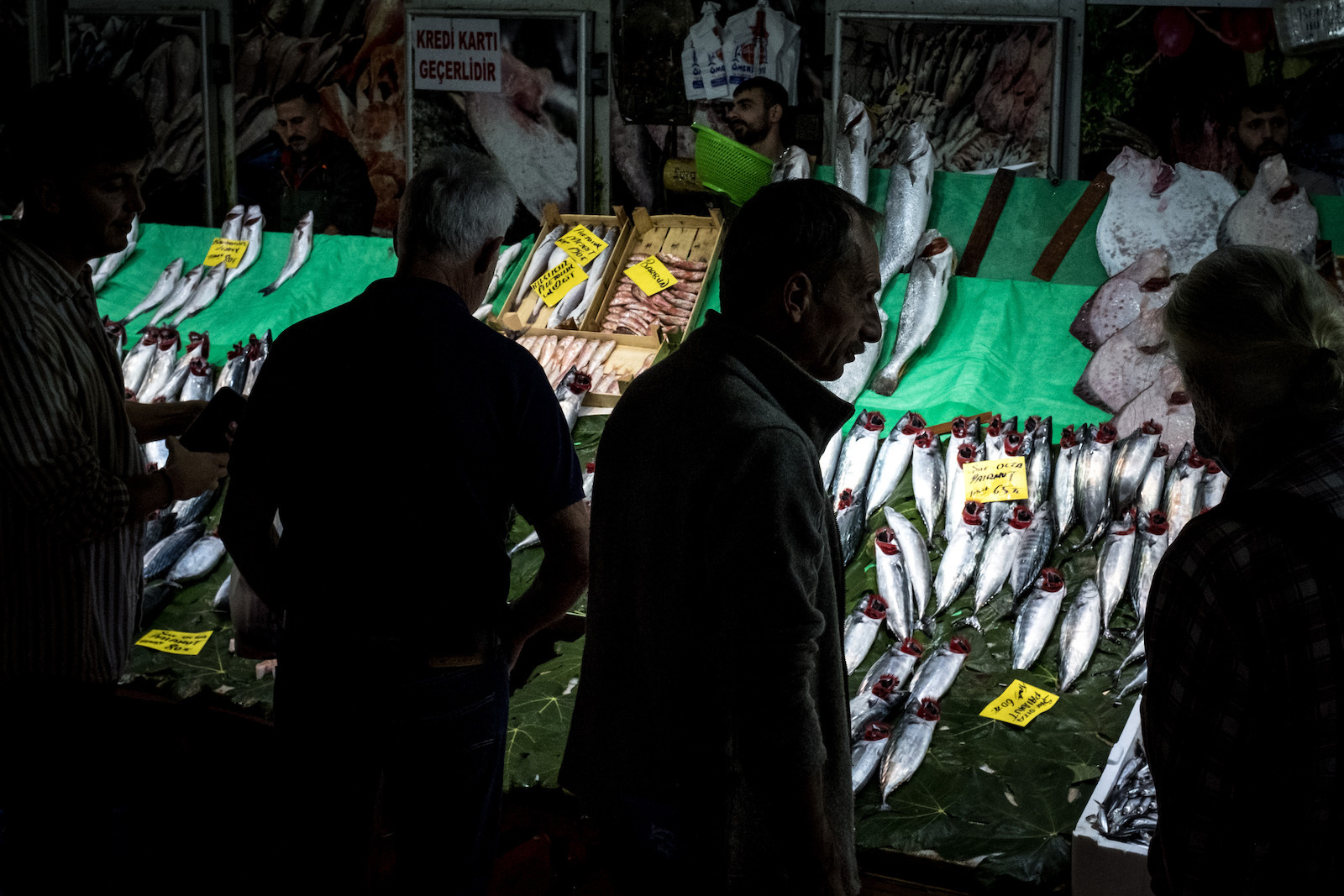 The global economy continues to face daunting challenges, shaped by the Russian invasion of Ukraine, a cost of living crisis caused by persistent and growing inflationary pressures, and the slowdown in China.

Our global growth forecast for this year is unchanged at 3.2%, while our projection for next year is lowered to 2.7%, 0.2 percentage point lower than the July Forecast. The 2023 slowdown will be broad-based, with countries accounting for around a third of the global economy poised to contract this year or next. The three largest economies, the United States, China and the Eurozone will continue to stall. Overall, this year’s shocks will reopen economic wounds that were only partially healed after the pandemic. In short, the worst is yet to come and, for many, 2023 will look like a recession.

In the United States, tighter monetary and financial conditions will slow growth to 1% next year. In China, we lowered the growth forecast for next year to 4.4% due to a weaker real estate sector and continued lockdowns.

The slowdown is most pronounced in the eurozone, where the war-induced energy crisis will continue to wreak havoc, reducing growth to 0.5% in 2023.

Despite the economic slowdown, inflationary pressures are proving stronger and more persistent than expected. Global inflation is now expected to peak at 9.5% this year before decelerating to 4.1% by 2024. Inflation also extends well beyond food and energy. Global underlying inflation fell from an annualized monthly rate of 4.2% at the end of 2021 to 6.7% in July for the median country. 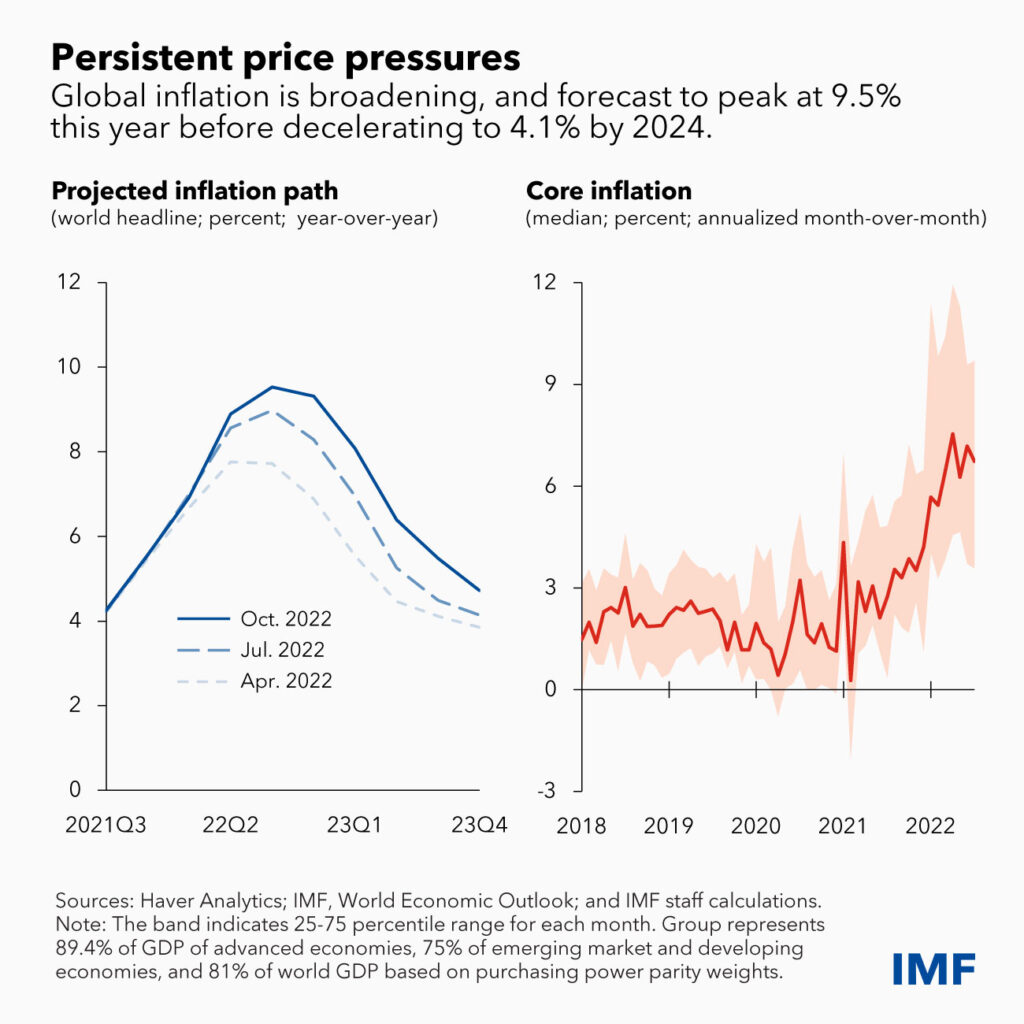 Downside risks to the outlook remain high, while policy trade-offs to deal with the cost of living crisis have become more difficult. Among those highlighted in our report:

Our latest insights also assesses the risks surrounding our baseline projections. We estimate that there is about a one in four chance that global growth next year will fall below the historic low of 2%. If many risks materialize, global growth would fall to 1.1% with near-stagnant per capita income in 2023. By our calculations, the probability of an equally unfavorable outcome, or worse, is 10% to 15%.

Growing price pressures remain the most immediate threat to current and future prosperity by compressing real incomes and undermining macroeconomic stability. Central banks are now focusing on restoring price stability, and the pace of tightening has picked up sharply.

There are risks of under-tightening and over-tightening. Insufficient tightening would further boost inflation, erode central bank credibility and unanchor inflation expectations. As history teaches us, this would only increase the potential cost of controlling inflation.

Excessive tightening risks plunging the global economy into an unnecessarily deep recession. Financial markets could also be struggling with too rapid a tightening. Yet the costs of these policy mistakes are not symmetrical. The hard-earned credibility of central banks could be shaken if they again misunderstand the stubborn persistence of inflation. This would prove much more detrimental to future macroeconomic stability. Where appropriate, financial policy should ensure market stability. However, central banks must keep a firm hand with a monetary policy resolutely focused on controlling inflation. 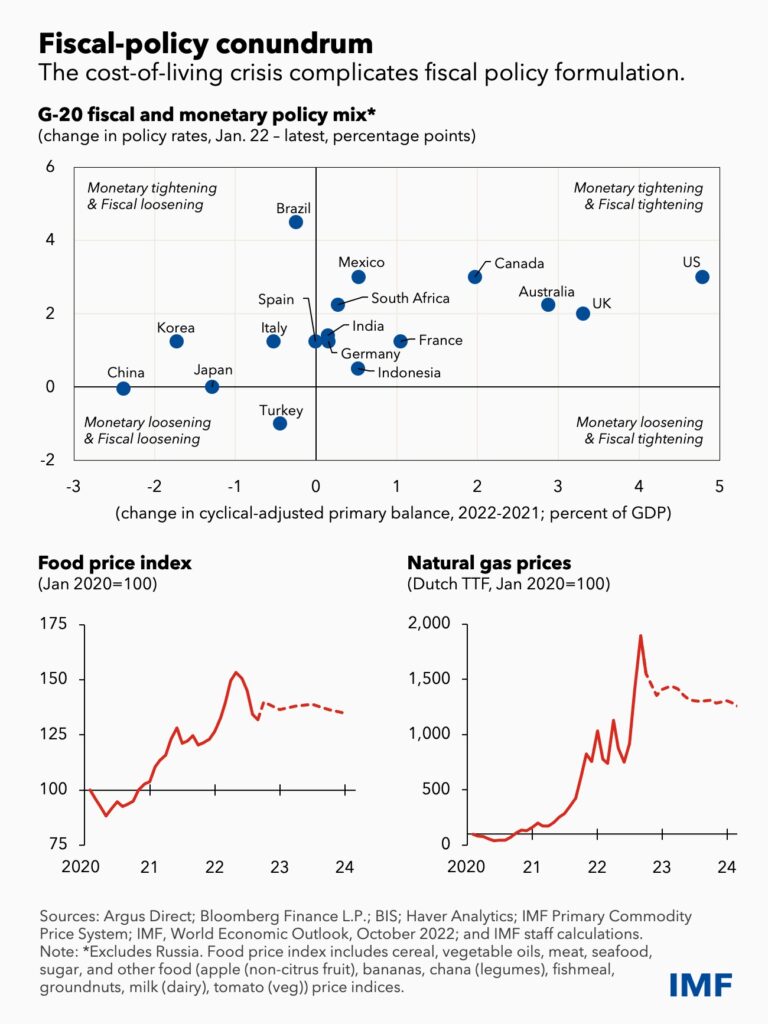 Formulating the appropriate fiscal response to the cost of living crisis has become a serious challenge. Let me mention a few key principles.

First, fiscal policy should not run counter to monetary authorities’ efforts to reduce inflation. This would only prolong inflation and could cause severe financial instability, as recent events have illustrated.

Second, the energy crisis, particularly in Europe, is not a transitory shock. The geopolitical realignment of energy supplies as a result of the war is vast and ongoing. The winter of 2022 will be difficult, but the winter of 2023 will probably be worse. Price signals will be essential to curb energy demand and stimulate supply. Price controls, untargeted subsidies or export bans are fiscally costly and lead to excess demand, insufficient supply, misallocation and rationing. They rarely work. Fiscal policy should instead aim to protect the most vulnerable through targeted and temporary transfers.

Effects of a strong dollar

For many emerging markets, the strength of the dollar is a major challenge. The dollar is now at its highest level since the early 2000s, although the appreciation is more pronounced against the currencies of advanced economies. So far, the upside appears to be driven primarily by fundamental forces such as US monetary policy tightening and the energy crisis. 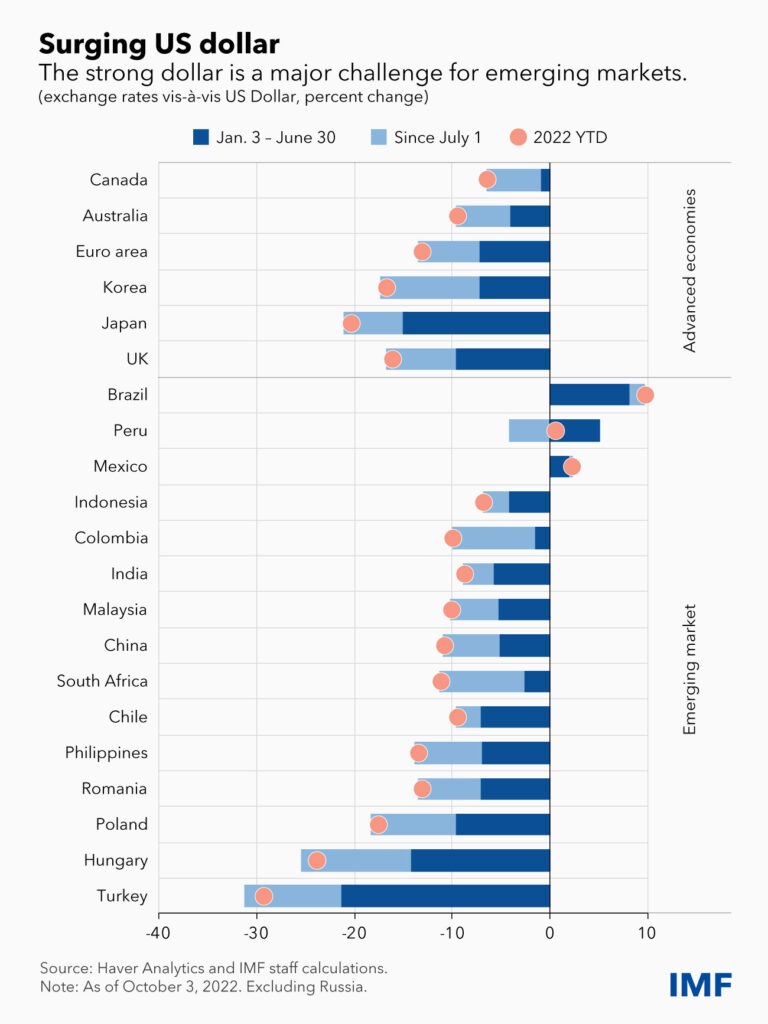 As the global economy heads into turbulent waters, now is the time for emerging market policymakers to batten down the hatches.

Eligible countries with sound policies should urgently consider improving their liquidity buffers, including by requesting access to IMF precautionary instruments. Countries should also seek to minimize the impact of future financial turmoil by combining, where appropriate, preventive macroprudential measures and capital flows, in line with our Integrated strategic framework.

Too many low-income countries are over-indebted or close to over-indebted. Progress towards orderly debt restructurings through the Common framework of the Group of Twenty for those most affected is urgently needed to avoid a wave of sovereign debt crisis. Time may soon run out.

The energy and food crises, coupled with extreme summer temperatures, are stark reminders of what an uncontrolled climate transition would look like. progress on climate policiesas well as on debt settlement and other targeted multilateral issues, will prove that targeted multilateralism can indeed achieve progress for all and succeed in overcoming geoeconomic fragmentation pressures. 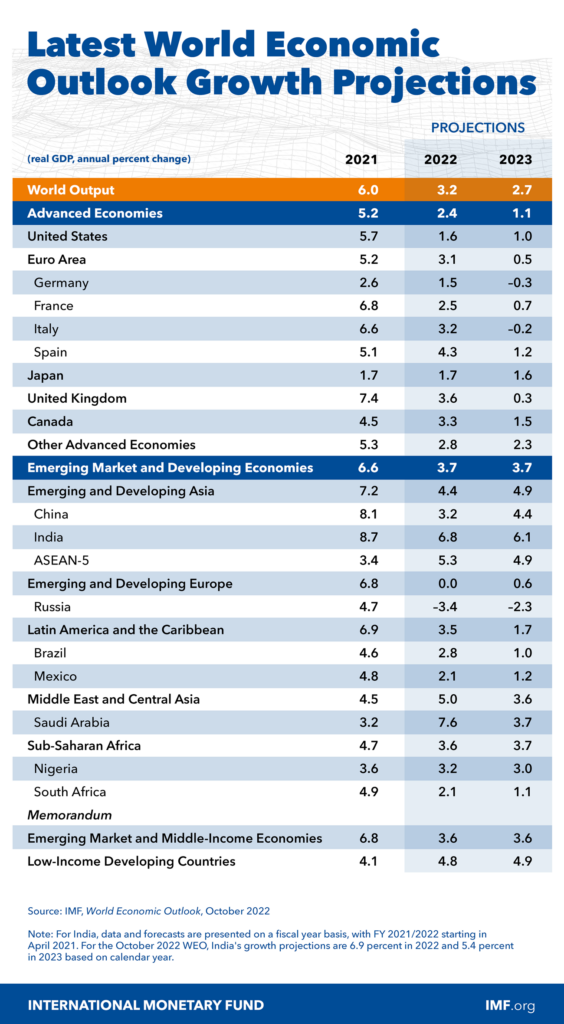 A version of this article originally appeared in the IMF Blog.