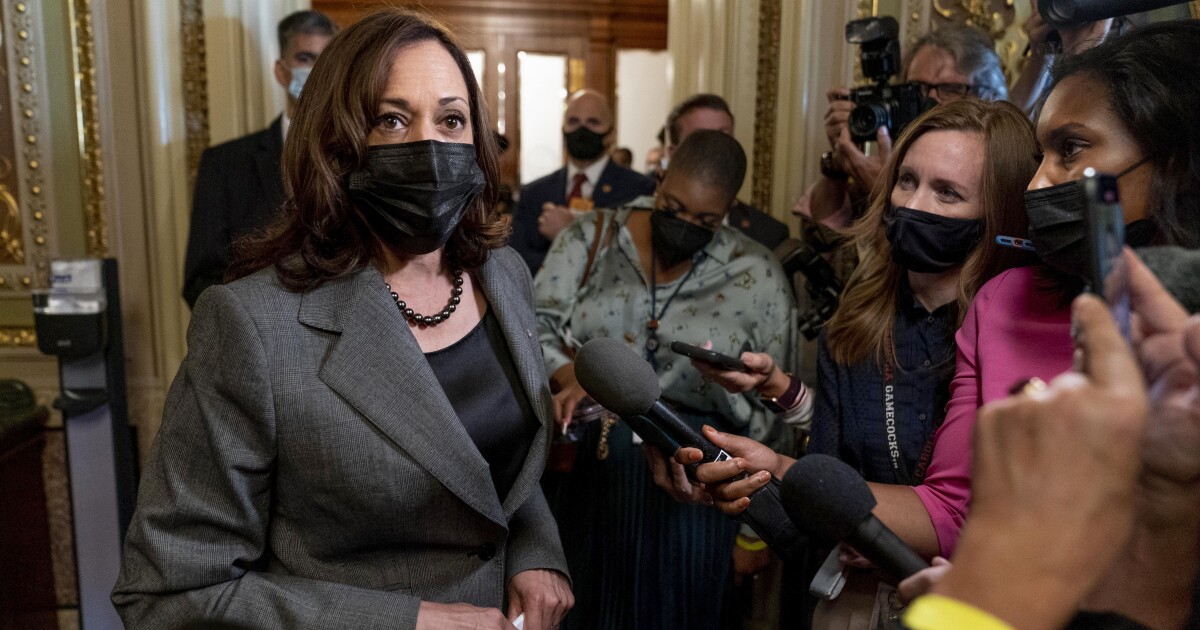 Critical Politics: What Does Kamala Harris Do With Her Time?

When I tell people that I cover the vice president Kamala harris, they often answer with the same question: What is she doing?

Since taking office with an unusually high profile, she has faded, to some extent, from public view. That’s typical for VPs, but unexpected for supporters and critics who thought Harris would have an unusually important role.

For those of you who want to know what the Vice President does with her time, The Times has put together a tracker for her public events.

Hello and welcome to Essential Politics: Kamala Harris Edition. This week, I’ll explore what Harris’ public calendar can tell us about his role in what was early termed the “Biden-Harris administration.”

Not all of Harris’ work is included in his public schedule. But events that the White House wants the public to know about, whether open to the press or not, are sent in a daily email to the reporters covering it. A similar is sent by e-mail for President Biden. Harris’ schedules include some of his meetings with Biden and lawmakers, his roundtables with interest groups, his trips to water treatment plants, to foreign countries or elsewhere.

Not everything is planned, including some behind-the-scenes meetings, phone calls, and time spent with advisors. But the events announced are a strong signal of the administration’s orientation towards one of its most powerful tools: its ability to attract media coverage.

Three of The Times’ visual data reporters – Thomas Suh Lauder, Maloy Moore and Matt Stiles – created an interactive tool, released this week, that downloads these timetables and categorizes them.

When I looked at the data, one of the first things I noticed was that Harris was spending less time with Biden than she had earlier in his tenure, both in terms of the number of ‘events and percentage of its scheduled events.

In any White House, time spent with the President is the most valuable currency. White House officials said Harris had not lost weight or confidence. Top leaders are simply spreading their wings, reaching out to more people and places now that COVID-19 restrictions have eased.

It’s not clear whether separate event listings for the president and vice-president are good for Harris. The reality is, Harris gets a lot less media coverage when she’s alone, which may be why so many people say they don’t know what she’s up to. And less time spent with Biden can make it harder for her to get to know him and influence politics.

Former Democratic primary rivals have some history, but nothing like the battle scars Biden has racked up with some of his close advisers who have served him for decades.

You can read more about the implications in this article I wrote with Stiles.

If you’re a fan of this newsletter, you’ll probably love our new daily podcast, â€œThe Times,â€ hosted by columnist Gustavo Arellano, as well as reporters from across our newsroom. Every day of the week, it takes you beyond the headlines. Subscribe on Apple Podcasts and follow on Spotify.

What else can the timetables tell us? Harris spends less time talking about COVID-19 than she did in the early months of the administration, when officials were spending much of their energy rallying the country to get vaccinated and control the spread of the coronavirus .

She also spends less time talking about migration from Central America. Harris, in March, was tasked with the thorny task of curbing migration from Honduras, Guatemala and El Salvador by addressing its “root causes,” which include corruption, poverty, and violence against women. gangs and climate degradation that have exacerbated the devastation caused by natural disasters. The mission was a political headache, as border encounters with migrants reached record numbers and conservative politicians and media blamed Harris.

Harris visited the area in June and the administration did some behind-the-scenes work. But Harris has not had a publicly announced event on the matter since August.

The vice president’s other big mission is to expand voting rights in the face of Republicans’ state-level efforts to pass laws that restrict them. This effort is not going well either; Senate Democrats failed to push forward a bill for the third time last week after failing to gain support from Republicans. Advocates are pushing Senate Democrats 50-50 to change the filibuster rule that requires a 60-vote majority to pass many bills.

Harris had an active schedule of events related to the topic over the summer, but has only hosted a few events since then.

Digging deeper into the schedules, you’ll find that about half of Harris’ events have been fully open to the press. A third are closed to the press. The remaining events are a hybrid, typically containing a “pool spray” that allows photographers and reporters to hear some of his remarks for five or 10 minutes.

Harris’ preferred format when engaging with the public is the roundtable, in which she discusses issues with activists, business leaders or members of the general public who help illustrate the political goals of the administration. She detained 27 of them on Tuesday.

These are staple things for most vice presidents, who, like Harris, are often asked to highlight the administration’s agenda without overshadowing their boss, the president.

Harris advisers say she also enjoys roundtables because they are a good way to speak to a cross-section of people during a pandemic, where larger events are difficult or impossible to organize. They say she also enjoys hosting small groups in her large ceremonial office to highlight the fact that no one like her – a woman of color and of South Asian descent – has ever sat there before her.

For the most part, the schedules reinforce my impression that Harris behaves like a conventional modern vice president – regularly meeting Biden and otherwise selling his agenda. The initial idea that some on the left and on the right had – that it would have a disproportionate role – does not hold true.

It is worth keeping an eye out for these trends over the next three years. A vice president’s time is his greatest asset.

Do you like this newsletter? Consider subscribing to the Los Angeles Times

Your support helps us get the news that matters most. Become a subscriber.

The view from Washington

– The Supreme Court again refused Friday to suspend an abortion law in Texas, writes David G. Savage. Instead, the judges said they hear the arguments next month on whether the Department of Justice has standing to sue Texas.

– D’Andrea Castillo: Most customs and border protection officers who participated in secret social media groups containing violent and sectarian posts against migrants and members of Congress received severely watered down punishment, according to a report released Monday by the House of Representatives.

– From Jenny Jarvie and Margot Roosevelt: After decades of stagnant wages and declining pension and health care benefits, followed by exhausting 19 months of long hours during the COVID-19 pandemic, many American workers are fed up. A small but growing number are getting organized, but is it really #Striketober?

– Biden is flying to Rome on Thursday to attend the annual G-20 summit, a gathering of leaders from the world’s most powerful nations, writes Chris Megerian. Here’s what the Times will be watching.

– For months, Republicans have been shouting fraud on the elders President Trump ‘loss of 2020. They have gone silent as is a Nevada ally instructed to vote twice, writes columnist Mark Z. Barabak.

– Since 2008, former president obama and Bruce springsteen formed an unlikely friendship. Dorany Pineda has the details about their new book, a collection of intimate and thoughtful conversations between the two that builds on the duo’s eight-part podcast series.

The view from California

– Three months after the govt. Gavin Newsom demanded that state employees be fully vaccinated against COVID-19 or undergo weekly tests, its promise that the California government would lead by example was broken, reports Melody Gutierrez. Most state-run workplaces have failed to test unvaccinated employees.

– If LA’s city hall scandals aren’t as blatantly corrupt as those in other cities, it could not to be for want of trying, writes columnist Patt Morrison. The city of Los Angeles government is designed to expand power and keep too much of it out of the hands of a single politician.

Subscribe to our California Politics Newsletter to make the most of the Times’ state political reporting.